September is Childhood Cancer Awareness month and this year we invited a few of our CRG families onto our social media profiles to share their stories, the realities of pediatric cancer and how Camp Rainbow Gold has made a difference. Their posts are shared here, edited only for clarity. 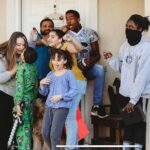 HI! My name is Christa Smith, and this is my incredible family. My husband Adam and I met at the TA truck stop in Boise, Idaho. Our paths happened to cross one night in November 2005. He was an over-the-road truck driver stopping for dinner and a break, and I stopped to use the restroom and buy a lottery ticket. We conversed over the phone for about 6 months before I finally caught the hint, he might like me. I’m quick like that! He had children out of state, and I had two young boys (Dante and Dason) from a previous marriage. As our relationship grew, I remained guarded and cautious of my heart.

In September 2006, my oldest son (who was 4 years old) would be diagnosed with cancer. My world quickly started spinning and my focus moved to keeping my child alive. My relationship was new with Adam and I was convinced he would be running to the hills soon. He did quite the opposite. He would take “home time” to come visit me. One day we sat in the hospital, Dante started to vomit, and Adam quickly grabbed a bucket. He sat there and rubbed his bald head, holding a puke bucket, and comforting my child. At that moment, I fell head over heels in love with him. We were married in July 2007. I was grateful to have 4 bonus children from our union, even if they lived far away and we didn’t get to see them often. Our marriage was quickly blessed with a baby girl in the spring of 2008 (Tatiana), another beautiful baby girl in 2010 (Amiyah), and our caboose and adorable son in 2012 (Urijah).

Our family enjoys sports, my husband has coached many different sports in the valley throughout the years. We love spending time together and have a weekly family night to try and remind our kids just how cool we are…or think we are. Growing up I always wanted a large family. Our house is LOUD and full of laughter, it’s exactly where I want to be. 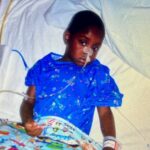 On September 23, 2006, I heard the words that will bring any parent to their knees. “Your child has cancer.” These words will forever live in my memory. How is that possible? The immediate feeling of guilt, with what could I have done to prevent this, fear, depression, and absolute panic rush your body as you try to process the information. Dante was an energetic child who was full of laughter and love, how could he possibly be sick?

On September 28, 2006, I put my “seemingly” healthy 4-year-old to bed. I woke him at 6:00 a.m. for a bowl of his favorite cereal, Fruit Loops. I had no idea at the time that it would be his last bowl, for about 3 years. Later that day he would endure a 12-hour surgery to remove the tumor that was taking over his body. The next few weeks are somewhat of a blur, as I attempted to take in a lifetime of medical information in a few short days, to make the decisions that would give my son the best chance of surviving his illness.   Medical language, procedures, medications, and hospital life became our new reality. The next few years were full of hospitals, infections, setbacks, and many tears. We spent practically every major holiday in the hospital, complete with a visit from Santa on Christmas Day.

My innocent preschool-aged child learned the names of pain medications, antibiotics, and chemotherapy drugs instead of his ABCs, colors and shapes. He started his first day of kindergarten with a Fentanyl pain patch and a dose of morphine through his permanent IV lines. 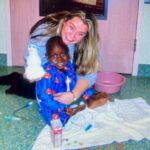 Throughout the entire ordeal he smiled, some days the smile was a little dimmer than others, but every day he smiled and occasionally you could see a glimmer in his eye.  The same glimmer that once made him so full of life would be the glimmer that would keep him alive.

Dante had been in the hospital for over a month. It was a November evening and it started snowing. He sat in the window watching the snowfall. He said, “I wish I could touch it.” That’s all I needed. I grabbed his pink bucket and down I went. I collected snow off the ledge and hauled it back up to the 4th floor. With A LOT of strange looks. His face when he touched it made all of that worth it. We built a snowman and even had a snowball fight right in his room. He smiled so big, and I will never forget that night.

There were days where rolling over in bed was impossible without assistance and days that he “rode” his stuffed horse throughout the halls of the hospital with a tired mother dragging his IV pole behind him in an attempt to keep up. 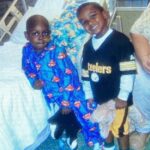 This is Dante and Dason getting ready to ride their horses through the halls of the hospital on a walk to the vending machine. Dante’s favorite place to stop, even though he couldn’t eat a thing in there! He would ask us to get Doritos, so he could lick the cheese off and then hand us the soggy chip.

Throughout the course of the next few years, Dante would miss a lot of school. When he did attend school, it would be with IV lines and G/J feeding tubes. He would be fed through a backpack of liquid “food” attached to him throughout the school day.

He did his best to run and play like the other kids, but he often came home in tears. School was HARD. Up to the day he graduated it was REALLY hard! His physical wounds are now mostly just scars that show what a warrior he is. His emotional wounds are invisible to many. I now have a class of 2020 graduate who struggles with the aftermath of the disease known as cancer. He still has his physical challenges, which he will carry for life. However, the grace in which he handled missing most of his senior experiences due to Covid-19, I partly contribute to the battles he has already fought…and won. 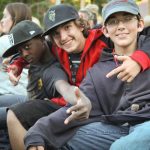 When I was a young kid, I used to watch a show called “Cheers.” In this show, there is a character named Norm. Every time Norm walked into the bar everyone would yell “NORM!” The idea in my mind was everyone at Cheers loved Norm. Yes, I am going to compare CRG to a bar 🙂

CRG is Cheers. It doesn’t matter who you are, how long you’ve been involved with camp, or how much you contribute. Anytime you attend a CRG event, you are home! Staff and volunteers have a way of making each camper and parent feel like they are “Norm.” You are always greeted with a smile, a hug, and a sincere desire to know how you are doing!

Cancer has a way of stealing our smiles, laughter, and fun. CRG has a way of bringing back smiles and laughter. My children anxiously look forward to camp. My teenager would even show excitement, usually, we got a neutral reaction to most anything. He looked forward to his week at camp, where he could be around others who don’t stare at the scars on his chest/stomach AND where he doesn’t have to answer a million questions as to where they came from. He gets to be free to just be himself, without the explanation. 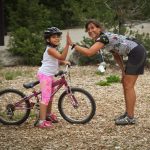 CRG isn’t just for the summer, year-round you can experience the “Norm” effect through Easter egg hunts, Halloween parties, Christmas events, etc. We were even able to experience camp virtually this year, and it was amazing! The effort invested in making it fun, even virtually. Was incredible.

My family has been greatly blessed to be touched by CRG for many years. A lot of people believe that once the chemotherapy/radiation stops the treatment and need for support is done, not realizing that often there are side effects from this treatment, effects that impact the family long after the last drip of chemo enters the patient. CRG remembers this, they remember that siblings are important and that the impacts of treatment can last for years. We are so incredibly grateful to CRG for the laughter and smiles they have provided our family through the years. 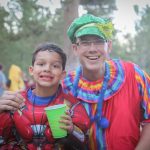 Our kids LOVE camp!!!! When asked their favorite parts of camp they each start sputtering so quickly I can’t keep up.

RAIDING comes high on the list for all of them.

PRANKS, like the “Toy Story” prank where they all became “toys” and fell to the ground when the camp director came or not coming to the breakfast when the bell rang.

SHINING telling someone what you appreciate about them, or something nice they did. 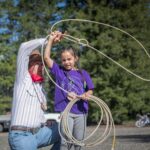 I LOVE watching their faces light up as they reflect on all the memories they have experienced through the years. What a blessing camp is to families who have endured so much pain.

For me, my favorite part about camp is I KNOW my kids are in a safe environment. The staff and volunteers are incredible! They treat your children like family, and through the years they have become family!

Some of our other favorite activities have been the Halloween party, Easter Egg Hunt, and OF COURSE, getting to meet Santa. The kids love seeing the smiling faces of volunteers and staff they have grown to love during the summer all throughout the year. 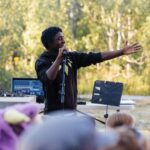 Our family wants to SHINE for all those who make camp possible! The counselors who comfort them while away from home, make them feel secure in the evening, and create laughter. The volunteers who give of their time to ensure all the details are worked out for a smooth week of camp. The smiling faces that greet the campers when we drop them off or pick them up. The staff who work tirelessly year-round to build the program and ensure that no child in Idaho must suffer a cancer diagnosis without the opportunity of some fun along the way.

We SHINE for ALL that is Camp Rainbow Gold!

← Our Survivor, Neymar Sign Up for the Fall Family Retreat →

Put Your Skills To Work